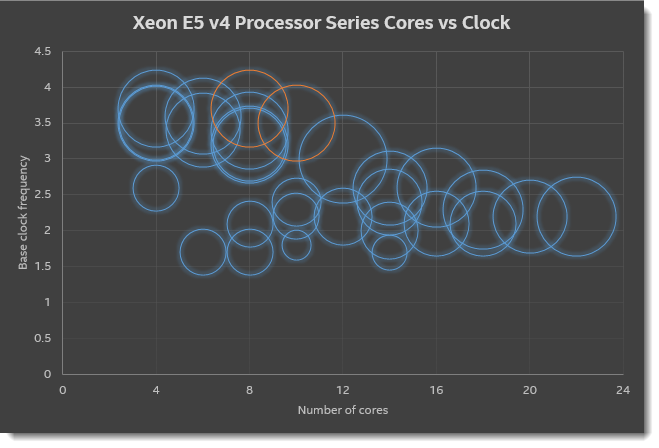 Once upon a time, when multicore processors were novelties, multicore was motivated by the simple fact that it was impossible to keep raising the clock frequency of processors. More “clocks” simply would result in an overheated mess. Instead, by adding more cores, much more performance could be obtained without having to go to extreme frequencies and power budgets. The first multicore processors pretty much kept clock frequencies of the single-core processors preceding them, and that has remained the mainstream fact until today. Desktop and laptop processors tend to stay at 4 cores or less. But when you go beyond 4 cores, clock frequencies tend to start to go down in order to keep power consumption per package under control. A nice example of this can be found in Intel’s Xeon lineup.
END_OF_DOCUMENT_TOKEN_TO_BE_REPLACED

This really happened last week, but I was in the US for the DAC then.  I did another blog on Intel Software blog, about a white paper that Wind River put out about how they use Simics internally. The white paper is a really good set of examples of how Simics can be used for software development, test, and debug – regardless of how old or new the hardware is.  It also touches my favorite topic of IoT simulation and scaling up – Wind River is actually using Simics for 1000+ node tests of IoT software!   Read on at https://blogs.intel.com/evangelists/2016/06/06/wind-river-uses-simics-test-massive-iot-networks/

A comment on my old blog post about the history of reverse execution gave me a pointer to a fairly early example of replay debugging. The comment pointed at a 2002 blog post which in turn pointed at a 1999 LWN.net text which almost in passing describes a seemingly working record-replay debugger from 1995. The author was a Michael Elizabeth Chastain, of whom I have not managed to find any later traces.